What is breast cancer?

How common is breast cancer?

What are the symptoms of breast cancer? 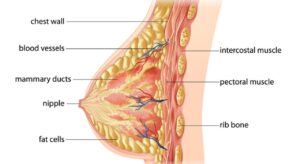 A breast is made up of three main parts:

• Glandular tissue includes the breast lobes and ducts
• Fibrous tissue provides support to the breast and give its shape
• Fatty tissue fills the space between glandular and fibrous tissue.

The glandular tissue of the breast is organized into 15 to 20 lobes. Within each lobe are smaller structures, called lobules, where milk is produced.

The ducts are the tubes that carry milk from lobes to the nipples. The dark area of skin surrounding the nipple is called the areola.

Normal Breast Changes During Your Lifetime 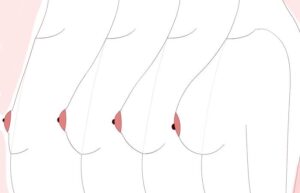 Most women have changes in their breasts during their lifetime. Many of these changes are caused by hormones estrogen and progesterone.

Young women have more dense tissue in their breasts. Dense tissue has more glandular and fibrous tissue and less fatty tissue. This kind of tissue makes mammograms harder to interpret, because both dense tissue and tumors show up as solid white areas on x-ray images.

Before or during your menstrual periods, your breasts may feel swollen, tender, or painful. You may also feel one or more lumps during this time because of extra fluid in your breasts. These changes usually go away by the end of your menstrual cycle.

During pregnancy, your breasts may feel lumpy. This is usually because the glands that produce milk are increasing in number and getting larger.

As you approach menopause, your menstrual periods may come less often. Your hormone levels also change. This can make your breasts feel tender and more lumpy than they did before.

What is Breast Cancer?

Breast cancer is a disease in which cells in the breast grow out of control. This can happen if the genes in a cell that control cell growth no longer work properly. As a result, the cell divides uncontrollably and may form a tumor. You may be able to feel it as a lump under the skin, or you may not realize it’s there at all until it’s found on an imaging test, such as a mammogram.

Breast cancer can spread outside the breast through blood vessels and lymph vessels. When breast cancer spreads to other parts of the body, it is said to have metastasized.

How common is Breast Cancer?

Breast Cancer is currently the most common cancer in India both in terms of incidence and mortality. It is emerging as a major public health problem.

More than 50% of patients diagnosed die of breast cancer which is just double the cases in comparison to west. This is due to :-

1.Ductal Breast Cancer
Ductal Carcinoma In Situ (DCIS): It is a non-invasive condition where the cancer cells begin to line the ducts of your breasts but do not invade the surrounding breast tissue.
Invasive Ductal Carcinoma (IDC): It is a common type of breast cancer that begins in the milk ducts of breast and invades the surrounding breast tissue.

2. Lobular Breast Cancer
Lobular Carcinoma In Situ (LCIS) is so early that it’s not even classified as cancer. Instead it is considered a cancer risk factor and may not even require surgery.
Invasive lobular carcinoma (ILC): It develops in the breast lobules and spread to the nearby tissues.
For invasive breast cancers, another key factor is the molecular receptor status of the cancer cells.

There are three major receptor subtypes that play important roles in the patient’s prognosis and treatment:

1. HER2 – Positive Breast Cancer.
HER2 is a protein that promotes cell growth and multiplication. It is found on the surface of all breast cells. A breast cancer is HER2-positive when it has much higher levels of the protein than normal.
A HER2-positive diagnosis was at one time associated with a higher risk of recurrence. Recent treatment advances, particularly with targeted therapies, have made the disease more curable in its early stages.

2. Hormone Receptor-Positive/ER, PR-positive Breast Cancer
Hormone receptor-positive breast cancer (sometimes called Luminal A) has receptors that bind with one of two naturally occurring hormones, estrogen and progesterone. These hormones fuel the growth of the cancer by binding to these receptors.
Endocrine therapies target this receptor/hormone recognition. These therapies can limit the body’s production of estrogen and progesterone or stop the receptors from recognizing the hormones.

OTHER TYPES OF BREAST CANCER

Some breast cancers are grouped by special or unusual traits that are not related to the molecular receptors.

The goal of care is to prolong life and maintain the patient’s quality of life. With emerging therapies and treatments, many metastatic breast cancer patients can live well for years.

What is Male Breast Cancer? 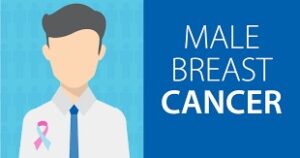 What are the Symptoms?

The symptoms of male breast cancer include:

The diagnostic techniques used for detecting breast cancer in men are much the same as for women.

The treatment is similar for male and female breast cancer patients. But, most male patients are referred to a genetic counselor to discuss BRCA testing. 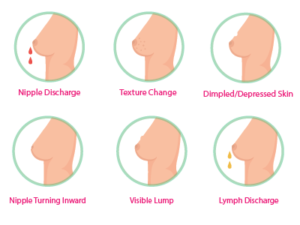 Breast cancer symptoms vary from person to person and there is no exact definition of what a lump or mass feels like. The best thing to do is to be familiar with your breasts so you know how “normal” feels and looks. If you notice any changes, tell your doctor. However, many breast cancers are found by mammograms before any symptoms appear.

Breast cancer symptoms may include:

• Lump in the breast or armpit
• Any change in size or shape of the breast
• Skin redness
• Dimpling or puckering on the breast
• Nipple changes, including the nipple turning inward, pulling to one side or changing direction
• Discharge from the nipple other than the breast milk
• Ulcer on the breast or nipple (sometimes extending to the areola)
• Thickening of the skin, resulting in an orange-peel texture

These symptoms do not always mean you have breast cancer.

However, it is important to discuss any symptoms with our expert Dr Rajinder kaur Saggu, for further evaluation.